A person in the first phase of the fourth stage of life realizes that events are not as fortuitous as they seem at first glance.  This is what has happened to me when wanting to share some highlights of the experiences of the Itineraries which we have adapted from the original Exercises and which, in these past years, I have accompanied in various groups.

How did this adventure of updating the Exercises come about?

If I remember correctly there were certain anniversaries and other significant events that ignited within me the need for this updating.

END_OF_DOCUMENT_TOKEN_TO_BE_REPLACED 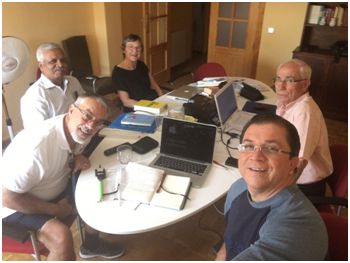 This meeting of the General Direction in Madrid fills us with satisfaction when realizing that in fact we grow every year in the ability to dialogue, to delve into the spirituality that makes us more human, and in the discovery of an increasingly liberating knowledge of Jesus. We really felt accompanied by the whole Group. We received fraternal messages from America, Latin and Northern Europe, Asia, Oceania and Africa. We were accompanied during these days by Maite and María del Mar, from the Spanish Group; Silvano and Ilaria visited us from Italy, and so did José and Luisa from Puerto Rico. END_OF_DOCUMENT_TOKEN_TO_BE_REPLACED

Rome, July 29th, 2017. At the end of July, the Italian Group gathered for its three-day summer Convivenza at Monte Altissimo headquarters. The main objective of the encounter was to continue the experience of the renewed Exercises, focusing this time around the third and fourth step of the Second Itinerary: “Jesus… a journey”, with the help and animation of Father Ignacio González.